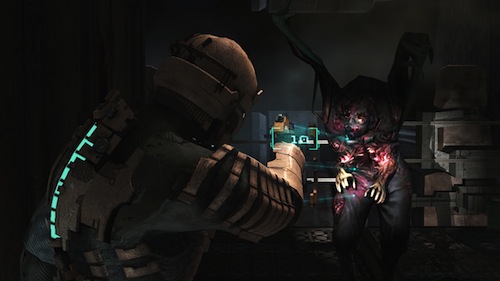 Dead Space, the well received 2008 shooter about slicing up aliens in space, is not a fun game.

Technically it’s very impressive. It’s got big budget graphics, immersive audio, nail-biting atmosphere, lots of gameplay variety, and plenty of cool set pieces. So how’d they screw it up? Several ways, but the most joy-leeching of the bunch is that the game punishes you for doing the very thing that it forces you to do: shooting aliens. It’s a game at odds with itself.

Let’s back up a second. The story line puts you in the gravity boots of a mute engineer who’s trapped on a space ship filled with psychotic aliens. The aliens’ limbs are their weak points, so shooting off their arms, legs, claws, and tentacles causes extra damage. You’re discouraged from shooting the trunks of their bodies in two ways: the game either passively punishes you by requiring a lot more shots to bring them down, or actively punishes you by doing something like breaking open their bodies to release a colony of tiny, hard-to-kill spider aliens.

So by a very deliberate design decision, the game urges you to shoot at the flailing limbs of aliens that are often rushing at you quickly and en masse. Pinpoint accuracy is required. And since the pace of the game is usually very hectic, normal human beings pushing buttons on a controller will miss more shots than they nail.

Everything I’ve described so far represents solid game design. This could easily be a very fun gaming experience with a reasonable difficulty curve. Unfortunately, the developers screwed it up by being stingy with ammo.

Shooting at the flailing limbs of shrieking aliens while they try to rip you apart is challenging, intense, and fun. Worrying about running out of ammo while doing this is still challenging and intense, but it’s definitely not fun. It’s a step beyond reasonable difficulty and a step into “why am I even playing this game?” territory. It brings the whole experience down.

It’s kind of like if Super Mario Bros. made you run around collecting “jumps” before you could leap over pits or hop on enemies. By being stingy with bullets, Dead Space withholds an element that’s essential to the particular kind of gameplay it sets up. You lose something precious every time you pull the trigger, but you’re required to pull the trigger all the time.

That’s not all that’s wrong with the game. You’re also shorted on health packs, credits, and the power nodes that allow you to upgrade your equipment. The size of your personal inventory at the start is laughably small. The storyline is an open fire hydrant of cliche, and just about every level requires backtracking, something I thought gamers and developers determined long ago was a major drag and agreed to avoid.

But the biggest fun-suck is item shortage. I’m sure the reason the developers chose to go this route is because they couldn’t decide whether they were making a shooter or a survival horror game, so they made something in between. They brought in the gameplay mechanics and enemy frequency of a shooter, and the item shortage and atmosphere of a survival horror game. But Dead Space is a shooter at heart. Putting a horror atmosphere in a shooter works. Being stingy with items doesn’t.

So what we end up with is a pretty good game buried under bad design decisions. Maybe Dead Space 2 will fix these issues, but I probably won’t care to find out.