In a fit of nostalgia/stroke of genius, I decided to set up a retro gaming station in my basement.

The basement is unfinished, so it’s basically a room the size of a small skating rink with a concrete slab for a floor and the chill of winter creeping in through the walls. Prior to starting my project, much of this floorspace was occupied by boxes of random crap my wife and I hadn’t touched since we moved in, plus a few noisy appliances and the cats’ litter box.

To start with, I cleared off an 11′ by 17′ section of floor by shoving all the boxes into the far corner of the basement, where they impede the path to the breaker box, and where they’ll probably sit until we move again. Then I dragged a semi-broken entertainment stand into the clearing, pushed it against the wall and, with great physical effort, planted the last CRT television in the world on top of it. Next, I wheeled over an armless desk chair and looked with pride on an entertainment station fit for a hobo. All it needed was some game systems.

The first console my family purchased was an Atari 2600. This was back in the ’80s, and even though I don’t retain many clear memories until around the time Ducktales was on TV (the early ’90s), I remember enjoying games like Vanguard, Tutankhamun, Missile Command, Yar’s Revenge, and Frogger. But since the Atari was rightfully owned by my older brother, he took it with him when he moved out.

Next we got a Nintendo, the system that won my heart and set me on a path to lifelong gamerdom (and probably obesity). The NES was my family’s main system through the Ducktales era, so I have far more fond memories of playing classic Nintendo games than I can put down here. Suffice it to say that I still remember the special powers of all the animal buddies in Little Nemo: The Dream Master, and to this day the Bubble Bobble theme song pops into my head at random times. Unfortunately, the NES was well on its way toward crapping out when we sold it in a garage sale about 15 years ago. 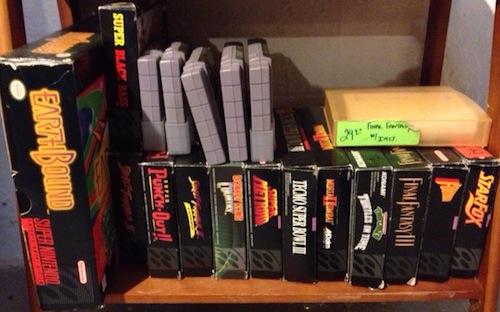 Several years later, I played Super Mario World at my buddy’s house and knew with absolute certainty that I had to have a Super Nintendo of my own. So I saved up my paper route money and bought one, despite my dad’s complaints that I should buy American-made products. Since the Japanese invasion hasn’t happened yet, I’ll call it a good move. Between Super Mario World, Donkey Kong Country, Super Metroid, The Legend of Zelda: A Link to the Past, Teenage Mutant Ninja Turtles IV: Turtles in Time, Super Castlevania IV, Street Fighter II, Super Mario Kart, Super Punch Out, Secret of Mana, Chrono Trigger, and the Final Fantasies, the SNES is probably MY FAVORITE GAMING SYSTEM OF ALL TIME. (Congrats, SNES–you get a ribbon).

After the 16-bit era, I, along with many others, gave up on Nintendo to enter the wonderful world of CD gaming with the Sony PlayStation. This would turn out to be a mostly ho-hum system with only a handful of stand-out games, but of course I didn’t know that at the time. I suspect the reason it never blasted into the stratosphere of awesomeness is because developers were still figuring out how to put one polygon next to another to create fun 3-D worlds full of exciting 3-D action. Still, the console that brought us Metal Gear Solid, Castlevania: Symphony of the Night, and Street Fighter: The Movie can’t be all bad. (Just kidding about that last one). 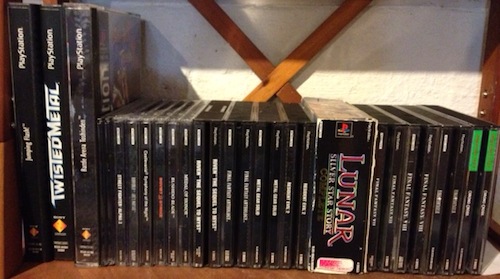 I must have liked the PlayStation well enough at the time, though, because I bought a PlayStation 2 the day it was released. This turned out to be a terrific system, one I still played occasionally for years after getting my Xbox 360. And while we’re on the subject of current-gen systems, I’ll note that I’ve since ended up with a PS3 and a Wii as well. Also, I’m a huge fan of the Nintendo DS and, of course, iOS devices.

If you weren’t taking notes, the gaming systems I still have in my possession are the Super Nintendo, PlayStation, and PlayStation 2. And since the PS2 is backwards-compatible with PS1 games, the systems I set up in my basement gaming station are the SNES and PS2. Also, somewhere along the way I ended up with a hacked Xbox that has every NES and Genesis game on it, so I set that up down there, too.

My goal was to create a space to replay the games I love–the Castlevanias, Zeldas, Marios, Metal Gear Solids, Jak and Daxters, and the like–as well as to finally play the games for those systems I’ve bought but never finished. And it turned out to be just as awesome as I’d hoped–except for one thing: I’ve learned that spending any significant amount of time near a litter box is a bad, bad idea.

Nowadays, when my wife comes home from work, I can often be found down in the basement, in front of a 24-inch CRT television, clacking away at an SNES or PS2 controller, while my current generation systems gather dust underneath a 52-inch LCD television upstairs. 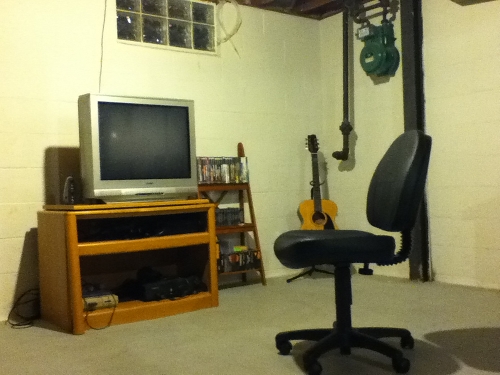